If you use a telescope for astronomical observation or astrophotography, or a camera for night scenes, such as the aurorae, star trails, and the like, you must have experienced dew building up within an hour or less.

Why Dew Forms on Telescopes and Lenses

The reason dew forms, is that the telescope or camera lens parts, made from metal and glass, lose heat to the very frigid clear sky. After some time, the temperature of the telescope parts drops below the dew point. At this point, mositure from the air starts condensing on the optical elements, and your observing session comes to an end.

The dew point is related to the ambient temperature and relative humidity.

In order to prevent dew from forming, you to either insulate the surface that loses heat (such as Telrad when not looking through it), or you need to heat the optical elements constantly, so that they stay above the dew point.

You need to do this in a variable manner. You don't want to heat the optical elements too much, so as to cause tube currents, or turbulence. You also don't want to use more power than what is needed, especially when you are running on battery power.

Also, the amount of power needed will vary from one time in the night to another, depending on how the dew point changes as relative humidity increases, and the ambient temperature decreases. So you need to increase the power under those conditions.

The High Cost Of Astronomical Accessories

Anyone who is a serious amateur astronomers knows how expensive accessories can be. This is probably due to the hobby being a niche market, and hobbyists resigned to the fact that they need to pay more.

The cheapest dew controller that I could find online was USD $39, from the UK. Shipping is extra.

But it does not have to be this way, since you can build your own versions of some accessories.

A dew controller is one of them. And you can build it for less than $10!

The heart of the dew controller is a PWM dimmer. PWM stands for Pulse Width Modulation. This dimmer is used for LED lights, such as those used for holiday decorations.

You will need the following tools:

Make two holes on the sides of the fridge box. The holes should fit the barrel jack and the RCA jack.
Cut the wires to suitable length.
Solder the wires to the terminals of the Barrel and RCA jack
Stick the other ends of the wires into the screw terminals. Make sure that the long side of the barrel jack to the V- input of the PWM dimmer. The short side should go into V+ input. The outer side of the RCA should go to V- output. The center should go inot the V+ output.
Pad the PWM dimmer with cardboard or thick foam. After you have everything working, you can use hot glue or silicone to reduce its movement.
Make a hole in the cover of the box, at the place where the dimmer knob goes. Take the knob off gently, then close the box and re-attach the knob.

Here is how mine looks after it was fully assembled.

Overall view of the completed dew controller, mounted on the north tripod leg with a bungee chord: 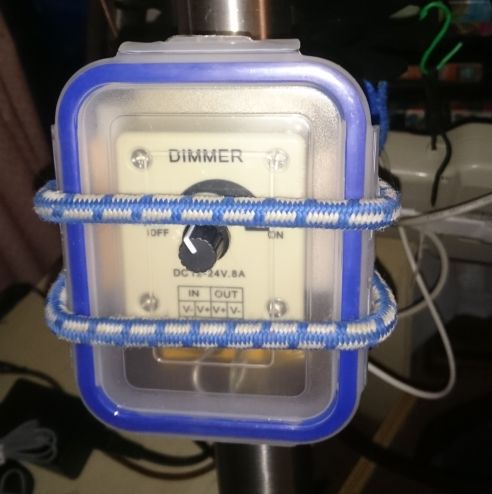 Inside view of the dew controller, showing the PWM dimmer, and the input and output power connections: 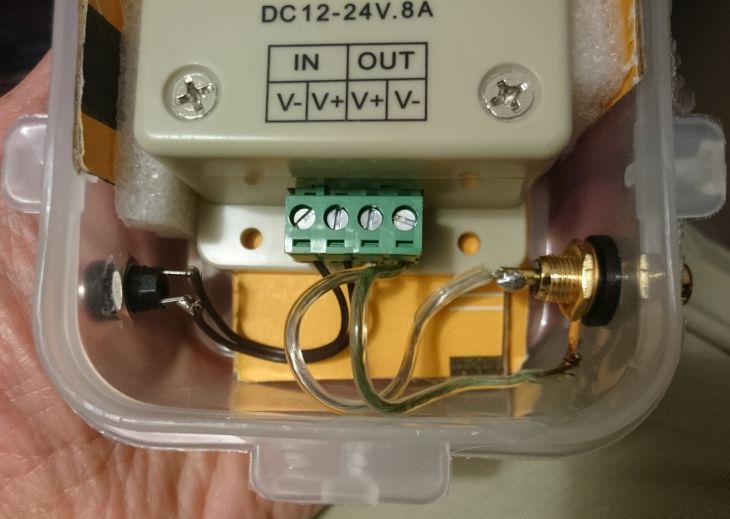 Left side, with the RCA output connector, going to the dew shield: 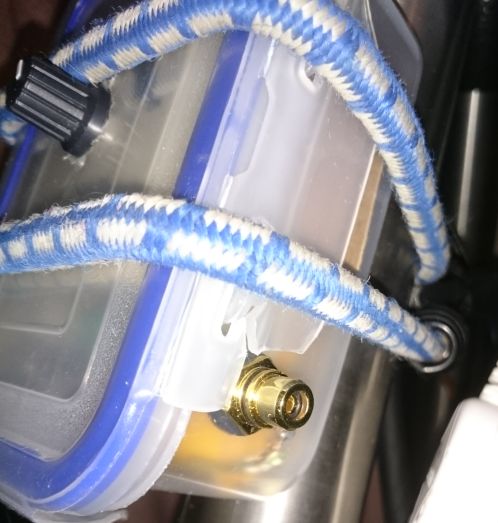 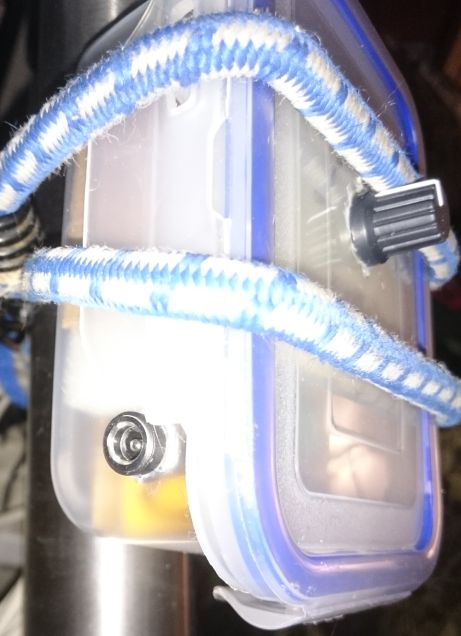 Before and after you solder the wires, make sure you use a multimeter with continuity settings to test the circuits. So, positive on the 5.5 barrel jack to positive screw terminal of the PWM dimmer should beep. Likewise, the ground to ground for the same circuit. Do the same with the RCA jack and the respective screw terminals on the dimmer.

Plug in a 12V power supply to the 5.5 mm barrel jack, and a heated shield or heating strip to the RCA jack. Wait for several minutes, then measure the temperature of the heating element. You can use an Infra Red thermometer, another type of thermometer, or feel by hand.

To test that changing the knob does change the temperature, you will need a thermometer though. Set the knob to a quarter and see how many degrees above ambient it changes after several minutes, and stays at a certain temperature. Test the same for half, and three quarters, to get an idea of how many degrees above ambient each one pushes the dew strip to.

Now you have a dew controller that is simple and works.

Or you can do what my friend Dave S did, and take the innards of the 4 PWM dimmers, and mount them in a box, and have a multichannel dew controller that way. Useful if you use another scope for autoguiding, with independent controls for each heating strip.

Note that a commerical dual channel dew controller can be CAD $119 or CAD $134.99, plus shipping and taxes.

Here are pictures he sent me: 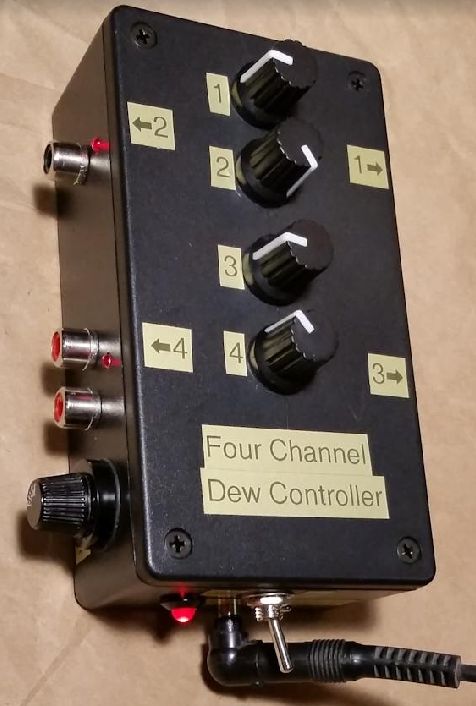 This will make a dew controller on-par with the state of the art commercial offerings, such as the Dew Buster controller, which is US $240.

One can also substitute an ESP8266 or ESP32 microcontroller, and check the dew point calculation every 5 or 10 seconds, as above.

The calculated dew point, along with the above measurements, can all be displayed on a web page hosted on the microcontroller.

In addition to automatically raising the temperature by 2 degrees above the dew point, there can be buttons on the web page to increase or decrease the heating. This can all be monitored and controlled from a smart phone.

This will be more feature rich than the state of the art controllers mentioned above.