My friend Ralph Janke who is from Germany and lives here in Waterloo, pointed me to a very interesting project that he worked on.

The project is funded by the European Union, and therefore uses open source and open data formats.

At the Virtual Manuscript Room in the University of Birmingham, there is a collection of manuscripts by Alphonse Mingana (also here).

Mingana (1878 - 1937) was an Assyrian Orientalist active in the early 20th century. He was sent to the Middle East on trips to collect manuscripts. His sponsor was Edward Cadbury (also here), of chocolate fame.

Mingana's name has crossed my readings several times a few decades ago, his writings being of a varied nature. And again a few years ago, for example: him alleging a Syriac origin for Quranic Arabic.

So, I was naturally intrigued.

Checking the list of manuscripts, one of them in the Virtual Manuscript Room, Arabic 1572 stood out! 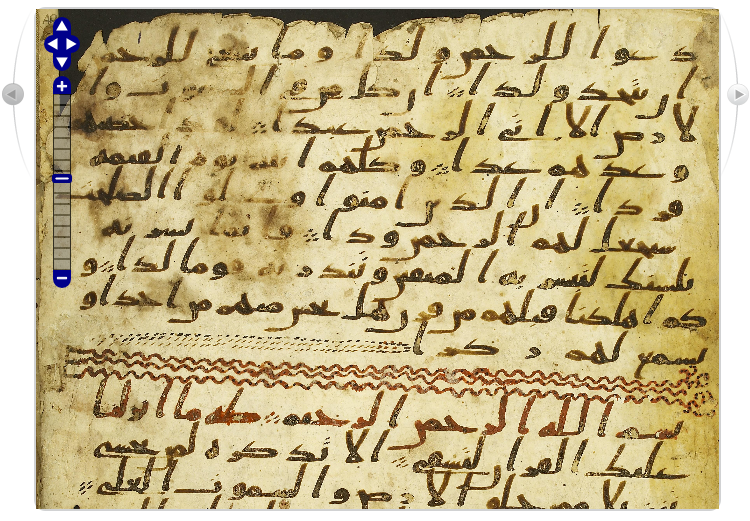 The catalog entries for this manuscript are:

The other catalog entry (Hunt) is as follows:

The web site uses a description of:

A very early fragmentary Qur'an, written in kufic script. Recently redated as possibly end seventh century, and as old as the oldest Yemeni manuscripts. The pages have been wrongly folded, so that the text is disordered.

The description in the web site is correct that the manuscript is older than originally thought. A date in the late 7th century seems consistent with the hand writing. There are no "dots" (there is no distinction between Taa', Baa', Yaa' ...etc. except in very few cases), and there are no diacritical marks either.

All three descriptions state that the script is Kufic. I was initially doubtful and thought that this is a variant of Hijazi, one of the oldest, and short lived, forms of written Arabic. However, upon closer inspection, I think it is still Kufic.

Here is another Kufic Quran manuscript from the same collection. A few centuries later than the one above. This one has a more disciplined and geometric style known of Kufic.

For comparison, see other examples of Quran manuscripts in Hijazi script, from the seventh century Sotheby's 2, Sotheby's 3 and Yemen Sanaa.

The script is clear and I could read it today after some 13 centuries.

The zoom feature is very helpful, but I was not able to get it to work in Konqueror.

Interesting work, and hopefully by putting these on the internet, they will be studied more widely by more scholars across the globe.