Crayfish are fresh water crustacean that look like a tiny lobster, to which they are closely related. Out of 250 species in the South-East United States, the species Procambarus clarkii, known as Louisiana red swamp crayfish, is the most well known.In places like Louisiana it is farmed commercially and consumed in various dishes.

This species is very invasive and takes over any place it has been introduced into, such as in Washington State, Spain, and elsewhere.

Crayfish introduced into the Nile

Crayfish has found its way to the Nile via an unfortunate mishap. Someone who has a shrimp farm in Al-Qanater imported the crayfish from the USA, thinking they are a kind of prawn. However, they ate their way through the mud paritions, destroying all the other tanks. What does the shrimp farm owner do? He gets rid of the pests by releasing them into the Nile!

Distribution of Crayfish in the Nile

A recent study has shown that the entire delta is infested with crayfish after the above mishap. The crayfish have not yet made its way south of the delta, stopping at Bani Sweif.

Crayfish is a cheap source of protein and seafood. Similar to the much more expensive shrimp and lobster, but much less in price compared to them. Due to their relatively short life span, and the fact that they lose the accumulated heavy metal and chemicals when the moult, they are relatively pollutant free.

However, a study by two Egyptians have found an alarming percentage (46%) was not suitable for human consumption, due to Enterobacters, and E. coli.

When I ate crayfish in Alexandria, I noticed that they did not taste as good as shrimp or crabs, as I expected them.

Due to the predatory nature of crayfish, and their voracious appetite, they have been introduced in some places (e.g. Kenya) to limit the number of snails that act as an intermediate host for Schistosoma, a disease that afflicts some 12 million Egyptians, and claiming the lives of many.

There are hopes that this accidental introduction may be a mixed blessing for Egyptians, and would be a safer means of controlling snails, in lieu of copper sulfate or other chemical agents.

The following set of pictures are of crayfish from various countries.

This is a female crayfish from Belwood Lake, in Ontario, Canada. Notice how she is bending its tail to protect its soft eggs. 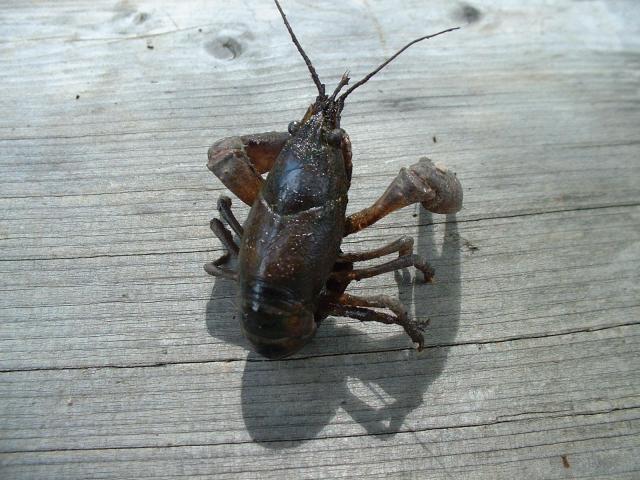 This is a frontal view of the same female crayfish from Belwood Lake, Ontario, Canada. 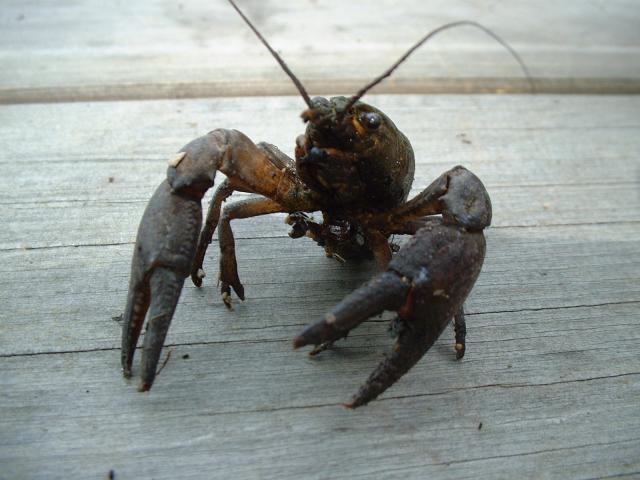 This is a crayfish swimming in Bahr Mouweiss, a canal in Zagazig, El Sharqeyya, Egypt. 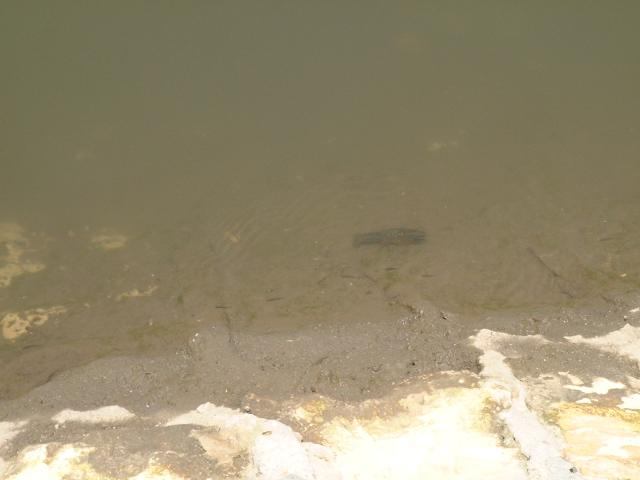 Another picture in Bahr Mouweiss of a crayfish. Note the burrow on the left. 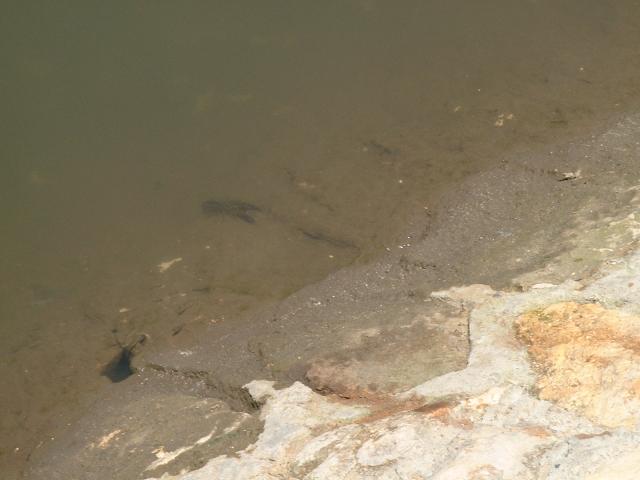 These are crayfish for sale in El Meidan market in old Alexandria. They are quite cheap, and not much in demand it seems. 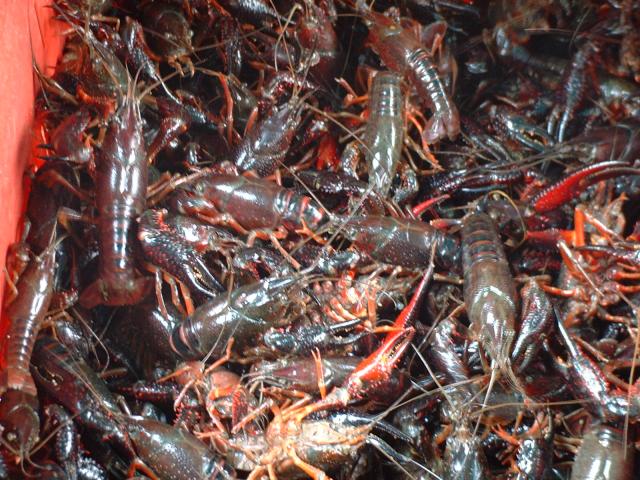 This is some of the above crayfish from El Meidan market after being cooked in traditional Alexandine Egyptian style. 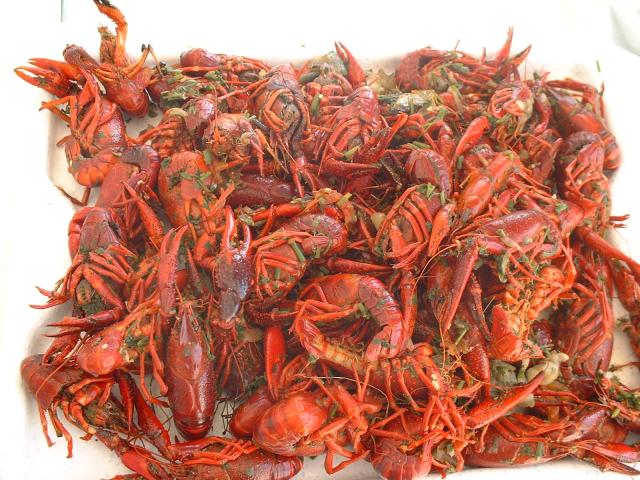 A closeup of cooked crayfish. 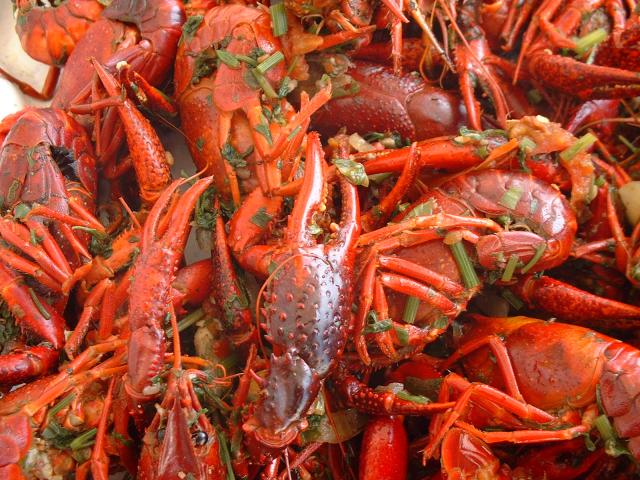 Another closeup of cooked crayfish. 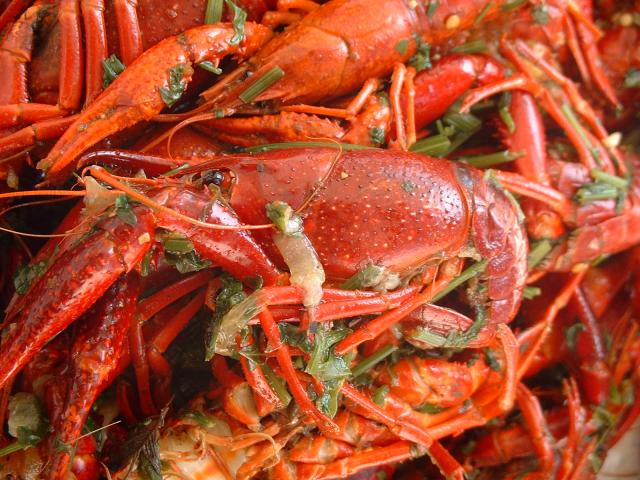 A closeup of a large cooked crayfish. 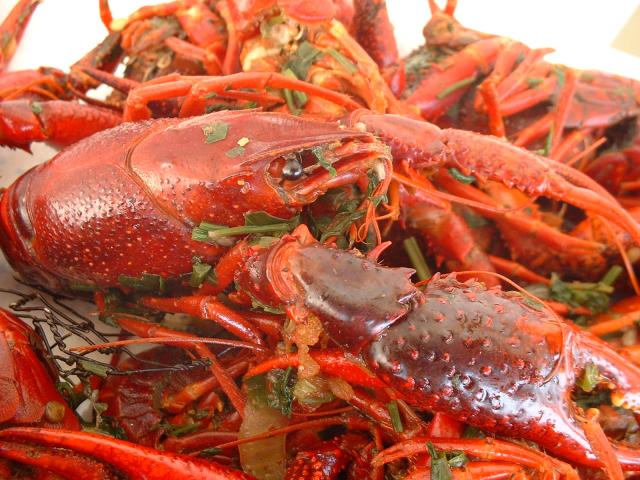 I think this is similar to the introduction of Dingos to Australia. Brought to solve a problem, unfortunately the caused other problems in the long run.

Actually, the dingo was introduced by humans, but a long time ago (5,000 years ago or so), and hence the extent of damage to the endemic fauna is unknown, since we don't know exactly how wildlife before it looks.

More appropriate examples are the cane toads, rabbits and many other invasive species.
--
Khalid Baheyeldin

I was wondering if i can find any cherax quadricarinatus in egypt? It's also called australian redcalw.
Can any one guide me to a company that sells breeders. or any one who is willing to ship a douzen to Tunisia.
Thanks
Salam

Pictures of the cooked crawfish looks really good. We would like to have a recipe that the Egyptians use. It would be great if the Egyptians could try Cajun style crawfish.

In case you need to know, here's a recipe for a Cajun Crawfish Boil...

Soak crawfish in fresh water for 10 minutes (this is to purge them) (some people say you need to salt—you don’t).

While you’re waiting, fill an 80-quart pot (fitted with a strainer insert) halfway with water and bring to a boil over a large outdoor burner over high heat. Add hot sauce, salt, Zatarain’s, and cayenne pepper.

Add potatoes and onions to the pot. (No need to peel either.) Boil vegetables for about 10 minutes. Meanwhile, cover a table with newspapers, flattened cardboard boxes, or plastic trays for serving the crawfish.

Add half the crawfish to the pot. After 5 minutes turn off the heat, cover, and let the crawfish steep to absorb the flavors for 15 to 20 minutes. Drain and dump onto the table. Repeat with the rest of the crawfish (you can boil 2 to 3 batches of crawfish in the same water-seasoning mixture).

Suck the head and eat the tail. That easy! You have to eat a lot of these to get filled up, but it's a whole lot of fun.

bring some people from the Louisiana oilfield there and they will show you what you can do with these, they are in high demand here in the U.S.